SPOTLIGHT: THE COLLECTION OF WILL RODGERS

Welcome to the DCCollectors collection spotlight, where we showcase one of your DC-themed collections! Whether it is a fan just starting out with a small collection, to some of the largest collections in the world, there is always something you can learn from looking at other’s collections. You might find a new way to display something, or maybe even see something you did not know existed!

Today’s focus is on the collection of Will Rodgers. Will might possibly be the world’s biggest fan of the animated show Super Friends. His passion for the series runs so deep, that he has even written a couple of books on the subject.

Check out more about Will’s collection below!

Will Rodgers: It was the fall of 1977 when I first saw the SuperFriends on Saturday Morning. It was the All New SuperFriends Hour, the series that introduced the Wonder Twins for the first time.

After that, I was wanting Comic Action Figures of the Wonder Twins. Sadly though, Mego never made them since back in the 70’s, there was a regulation that prohibited toys that tied in to animated cartoons. Back then, the SuperFriends never had an official toyline. While Mego did have the license to produce DC Comics Super Heroes, but the Wonder Twins were Hanna Barbera characters, and there was no license for them.

DCCollectors: How many pieces are in your collection?

Will Rodgers: Oh wow!! I had to do an inventory LOL!! I totaled up 223 pieces of the heroes, villains and sidekicks and pets who appeared on the SuperFriends from 1973-1985. When collecting the SuperFriends, there are 2 categories. 1: The official SuperFriends toylines like DC Direct and the Mego like figures by Figures Toy Company and DC Universe Classics since they have made figures of the Hanna Barbera created characters, namely the  Wonder Twins, Black Vulcan, Samurai, Apache Chief, and El Dorado  2: The DC Comics toylines that only have the DC Super Heroes and Villains who were in the comics and just happened to be on the cartoon series. This would include the original Megos, Comic Action and Pocket Super Heroes, and the 12 inch Megos. And of course, the Kenner Super Powers Toyline.

DCCollectors: If you could only choose one item to keep, which one would it be and why?

Will Rodgers: That’s actually a tough call for me to make. I love them all. But after giving it some thought, it would be narrowed down to either the Kenner Super Powers or the DC Direct SuperFriends Batman figure.  While I loved my Mego Batman figures as a kid, I loved the Super Powers & DC Direct SuperFriends versions more because I always liked Batman in the blue & grey costume and the blue shorts as opposed to the black shorts, since those were the colors of his costume on both the SuperFriends and the two Filmation cartoons.

When I began to collect the various Batman figures by Figures Toy Company, I also bought blue shorts from either classic TV Toys or Paul Clarke (Dr. Mego) to place on the Batman figures to give them the Filmation/Hanna Barbera look.

DCCollectors: If price did not matter, what is the one Super Friends item that you want to add to your collection?

Will Rodgers: I pretty much have most of what I want and I’m waiting for certain items that are in production (SuperFriends version of Hawkman by Figures Toy Company. I’ve put money aside so I’ll be ready to buy him once FTC has him in stock). But if price didn’t matter and if I had all the money in the world, I would pay handsomely to have certain toys and figures made that were never made by Mego, Super Powers, & the DC Direct SuperFriends line.

I could list them, but if I have to name one item, here it is. A few years ago, a company called Gentle Giant laser printed and made a few Kenner Super Powers figures in 12 inch form. I would have paid a handsome amount of money to have a 12 inch Super Powers figure of Aquaman to add to my collection. Unfortunately, Gentle Giant quit after making them, and I was hoping that they would have made Aquaman and Cyborg when the Justice League movie was released in 2017 and the standalone Aquaman movie in 2018.

DCCollectors: Where did you find those awesome diorama pieces behind the Super Powers toys?

Will Rodgers: Last year, I stumbled upon a webpage that consisted of a papercraft of the Trouble Alert (or Troubalert) Computer in the Hall of Justice.  It contains blueprints that you can cut out, and put together.  I wished they would have had instructions, but fortunately, I got help from a fellow Super Powers customizer on how to put it together.

This papercraft Trouble Alert was designed to put inside the Super Powers Hall of Justice playset. Believe it or not, the rest of the wall was put together myself with various color cardstock paper that I acquired from Hobby Lobby. It makes a great background for the smaller figures like Super Powers, the Mego Comic Action and Pocket Super Heroes and the DC Direct Pocket Heroes.

Oddly enough, I pose the DC Direct Pocket Heroes JLA Table & chairs with this wall. I also use this background when I photograph my FTC 8 inch figures, even though the background is not for those figures. I wish I could make a bigger version of this wall for the 8 inch figures, but I would not know how to make a bigger version of the Trouble Alert papercraft.

Anyway, for those collectors who would like to add the Trouble Alert Computer to the Super Powers Hall of Justice playset, I’ve included the link below.

Will Rodgers: Yes I do. While the SuperFriends is my primary focus, I do collect a lot of DC Collectible figures. My collection goal is primarily motivated by DC Media, TV shows, movies, and animated series. Over the years, I have amassed a collection of figures from other DC shows like Batman: The Animated Series, Superman: The Animated Series, and Justice League Unlimited.

I have collected figures from the movies BUT I prefer the authentic movie masters style figures, and not the oddball variations. I have also collected action figures made from the Batman 1966 TV series.

If price didn’t matter, I would love to collect all the DC Collectibles figures made from Batman: The Animated Series and the 16 inch figures made by Hot Toys.

DCCollectors: What piece of advice do you have for those just starting their collections?

Will Rodgers: If you love to collect more than one category, choose the one you’re the most passionate about. In my case, it’s the SuperFriends, and budget your money. Put some money aside so you’ll have it when the right time to buy the right collectible presents itself. And most importantly, enjoy what you collect. And don’t be ashamed of your passion.

If you love collecting what you love, be proud of it. Don’t let anybody try to shame you or make you feel bad or weird about yourself because of what you love.

DCCollectors: Do you have an interesting story regarding the collection, such as meeting someone famous while shopping for your toys, or a super deal you got on something?

Will Rodgers: During my last semester of my senior year in college, I took a class called Theater in New York, and the week that we journeyed by bus to the Big Apple, I daydreamed about being the SuperFriends Collector. That’s because I’d heard of Danny Fuchs, America’s Foremost Superman Collector, and Joe Desris, Kevin Silva and Ralph Garman, who are major Batman collectors. Today, it feels like I’m making that dream come true.

My passion for the SuperFriends is tremendous. I still love watching the episodes. I’ve amassed quite a bit of knowledge over the years. With the help of a professional author and friend of mine, Billie Rae Bates, I wrote what was supposed to be one big book, but ended up being a pair of books called The Ultimate SuperFriends Companion. And to quote Billie Rae “I left no stone unturned” as I wanted to cover everything there is to know about the long running Hanna Barbera cartoon. It’s interesting to note that to this day, the SuperFriends is still THE longest running animated DC cartoon and has yet to be surpassed.

To conclude this question regarding celebrity meetings. In both volumes of my books, you will see my pics made with Superman, Batman and Wonder Woman so to speak. I was richly blessed to meet Shannon Farnon, the original and true fan favorite voice of Wonder Woman, who was so kind as to write a forward that is in both volumes. I met Dean Cain, who in an interview revealed he was a big fan of the SuperFriends when he was a kid. And finally, I got to meet one of my childhood idols, not once, but twice. I got to meet the late great Adam West, who took over voicing Batman in the last two seasons of the SuperFriends.

Adam West will always be MY Batman, not only because of the TV series and 1966 movie, but also from voicing over Batman for both Filmation and Hanna Barbera.

The Ultimate SuperFriends Companion Volume 1 The 1970’s and Volume 2 The 1980’s are both available on Amazon. You can purchase Volume 1 and Volume 2 from Amazon.

Check out an image gallery below, featuring Will’s SuperFriends collection.

If you would like to share your collection with DCCollectors’ readers, please visit the Contact Us page, and drop me a line! I would love to feature your DC toy collection here at DCCollectors.com! 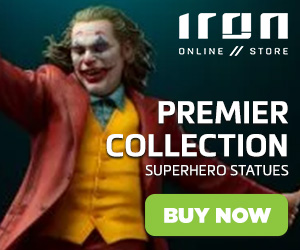 Hot Toys Updates us on The Batman Figure

SPOTLIGHT: The Collection of Rafael Torres

SPOTLIGHT: The Collection of Chad Connally

SPOTLIGHT: The Collection of Luke Bugg